Have you ever wondered what the best flour for gluten free brownies is? 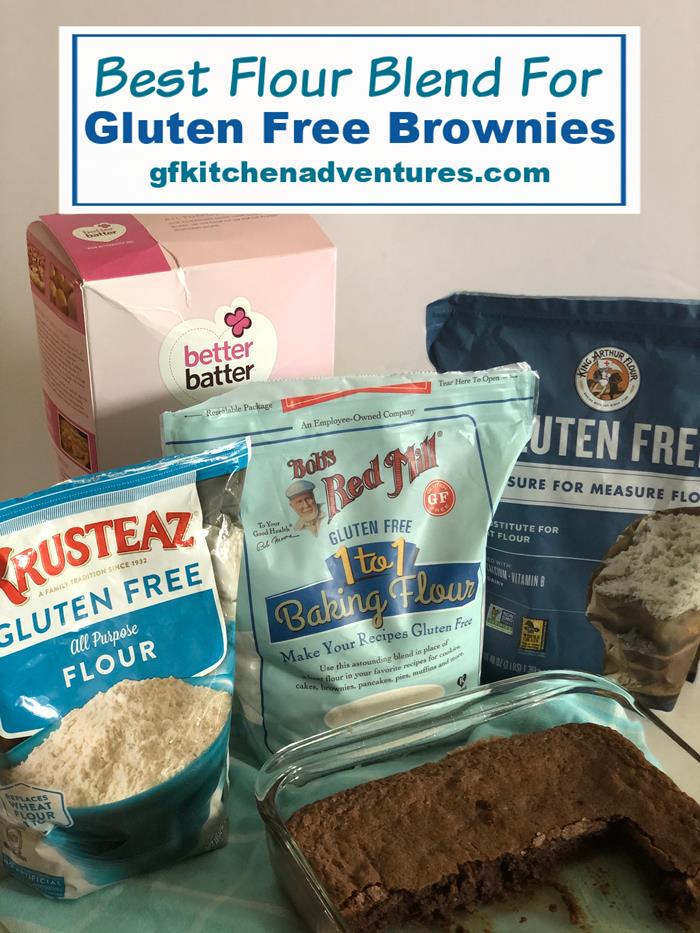 Many recipes say to use a gluten free flour blend, but they don’t tell you which blend to use. Knowing the blend used in the recipe is important. I have always wondered why so many bloggers and food sites leave it out.

The taste and texture of both the batter and the final result can vary with different blends because the ingredients in a blend can vary a lot.

I almost always prefer to use individual flours in my gluten free recipes. I love being able to get the exact ingredients I want for a recipe.

In some recipes, adding a little sweet rice flour can make a huge difference. Some recipes need more xanthan gum and some need less. Many recipes, such as muffins and pancakes, are often better without xanthan gum.

The ingredients in a recipe really can make a huge difference.

Over the last year or two, I have needed more quick and easy things when it comes to baking. As a result, I find myself grabbing my gluten free flour blends more and more.

Because of this, I have bought more blends than normal over the last six months. As I have tried different blends, I have realized even more that the end results vary.

I know I am not the only one who wants to get the best results with gluten free baking. I know many of my readers will find our results helpful, so I am sharing what the best gluten free flour blend for brownies is.

I made my favorite brownie recipe, which is my homemade gluten free brownie mix recipe, using different blends. I used this recipe because it is a recipe that I have made for years.

I wanted a recipe that was a tried-and-true gluten free recipe I knew my family loved. I have been making this homemade brownie mix for years, so it was the perfect recipe to use.

Over the course of a week, I made four pans of brownies. My family taste-tested them and each wrote down what they liked and didn’t like about each blend.

When I tested these blends, I really wanted to see what the best flour blend for gluten free brownies was, so I made them the exact same way with the exact same ingredients. I baked them all in a 9×13 glass Pyrex pan. The only thing I changed in the recipe was the brand of gluten free flour blend. All the blends I used contained xathan gum.

I also want to make it clear that this post is not sponsored. I did not work with any of the brands on this, and I paid for all the ingredients myself. This is a real and honest review of what my family liked and didn’t like about each gluten free blend in brownies. 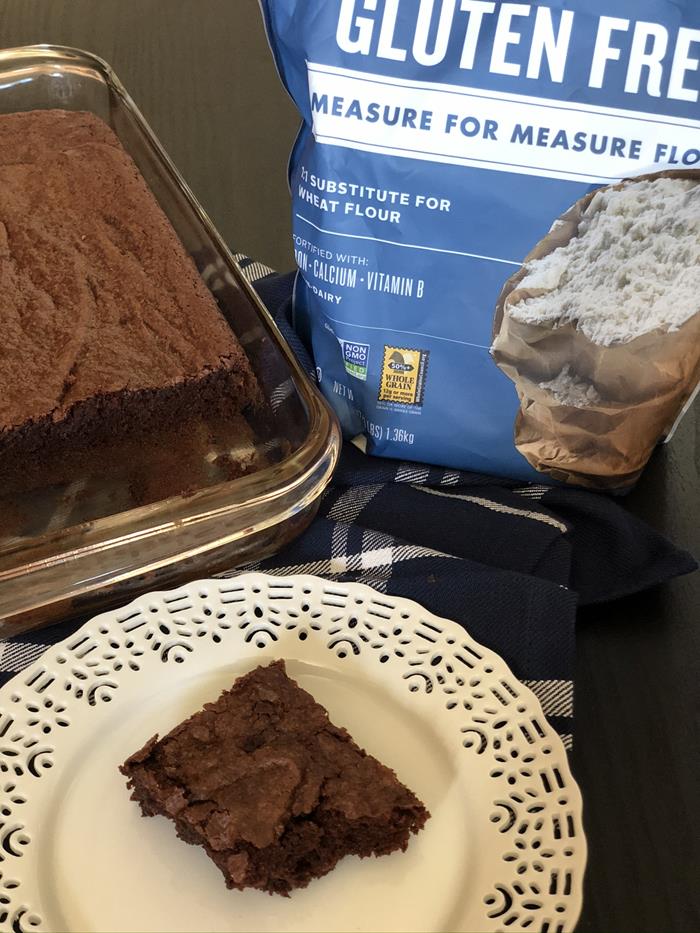 This is a blend that I have on hand to use occasionally, but I have never used it a lot. I have never taken notes or tested it against other blends, so I was curious how it would hold up against the other blends.

Here are a few of our thoughts on the King Arthur gluten free blend in brownies:

Overall, we liked the King Arthur gluten free blend in brownies and would make them again with the blend. 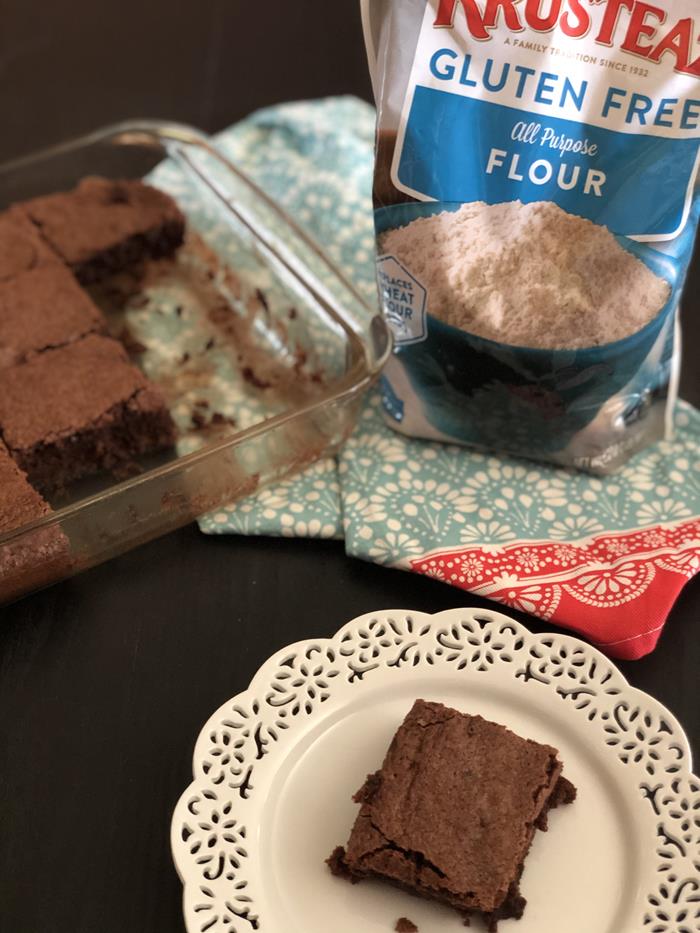 I bought this blend a few years ago when Sam’s Club sold it. I only bought one bag before they stopped selling it, so I did not try it in very many recipes. It is a blend that I can now find occasionally at Walmart and on Amazon, so I was curious to see how it worked in recipes.

Here are a few of our thoughts on the Krussteaz gluten free blend in brownies:

Overall, this blend was not bad. We all agreed that it tasted like a healthier brownie. I am sure that is because this blend is a little more of a healthier whole grain blend because it contains sorghum and millet flour. I look forward to trying this blend is some other recipes. 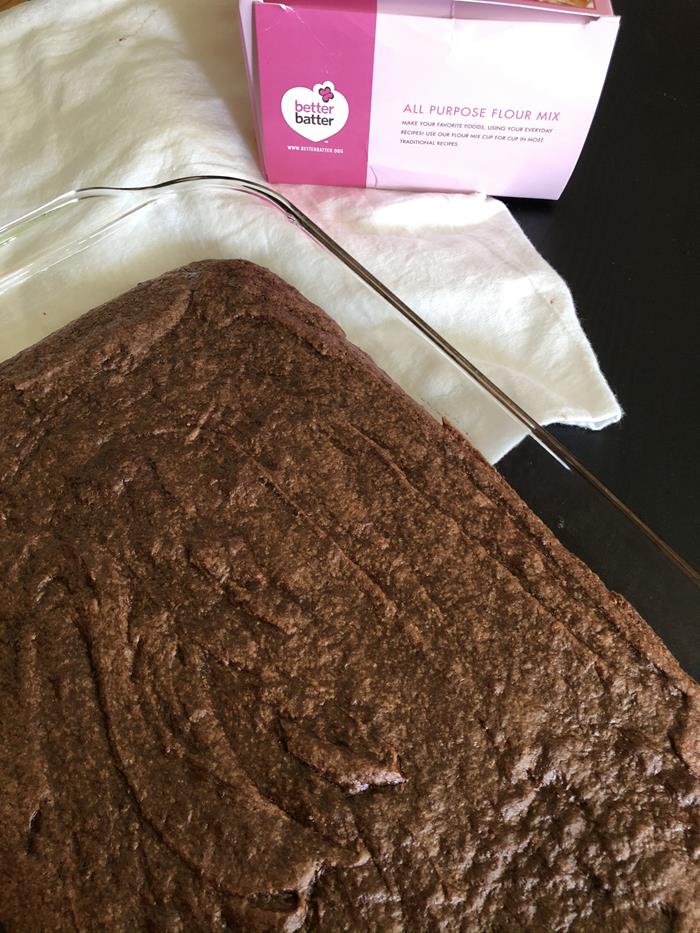 This is the first time I have used Better Batter’s gluten free flour blend. I have several readers that love it and have suggested that I try it.

I have never seen this blend in stores in my area. I am not sure if it is carried in stores at all. I ordered mine from Amazon, but you can also order directly from Better Batter.

The main ingredients in the Better Batter blend are white and brown rice flour and tapioca and potato starch. This blend also contains pectin, which I have never seen in a blend before.

Here are a few of our thoughts on the Better Batter gluten free blend in brownies:

I knew after we all tasted them that the Better Batter blend in brownies was not our favorite. The real sign that we did not like them was that three days later I threw out the last seven or eight brownies because no one would eat them.

One of my daughters said that they were not worth the calories. If she was going to eat dessert she wanted to enjoy it and didn’t enjoy the brownies enough to eat any more. My son said he would eat them if he had to, but he would much rather eat something else. The only time desserts go to waste at our house is when we don’t like them.

I think the texture and may be the taste issue with this blend might be the pectin. It is an odd ingredient to add to a blend, and I don’t think it worked well in brownies. It might in other gluten free foods, and I plan to try this blend in other things. However, I will not be using it in brownies again. 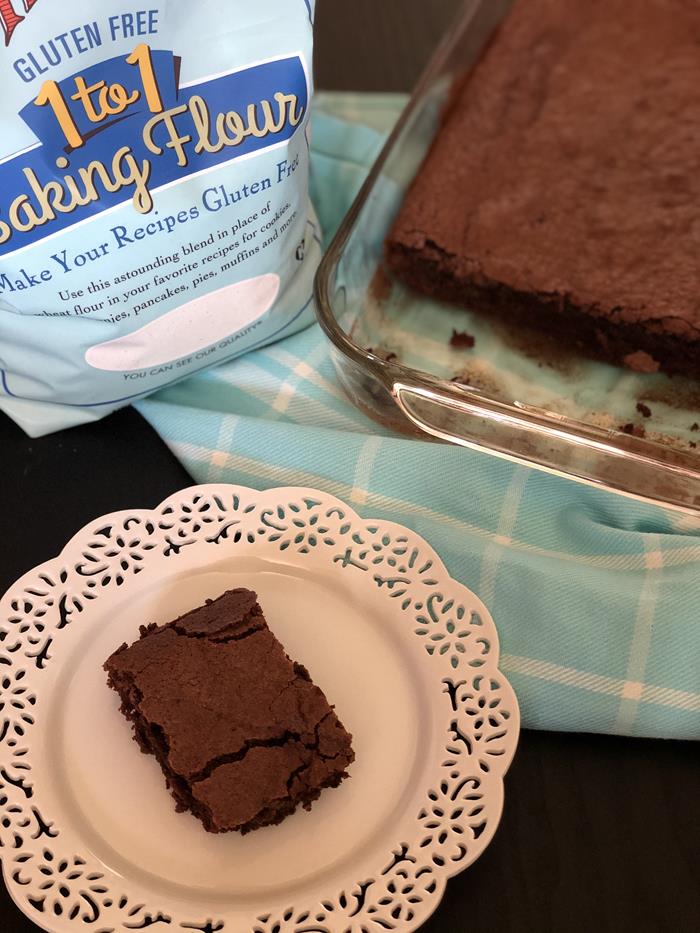 I have used Bob’s Red Mill 1-to-1 blend for years. It is my favorite blend because it is easy to find and I usually have great results. I am not sure if I have used it in gluten free brownies before though. I usually use the individual flours if I have them and not a blend for brownies. As a result, I was curious how they would taste with Bob’s Red Mill 1-to-1 blend.

Here are a few of our thoughts on Bob’s Red Mill 1-to-1 gluten free blend in brownies:

The Bob’s Red Mill 1-to-1 blend worked fine in brownies. We all like them, and the pan was gone in no time.

When I make desserts using individual flours, I almost always use sweet rice flour. Sweet rice flour usually gives desserts the best taste and texture. It was not surprising to me that my family liked these brownies. I also like the fact that this one contains brown rice flour and sorghum. It is a good mix of what works with something a little more whole grain. 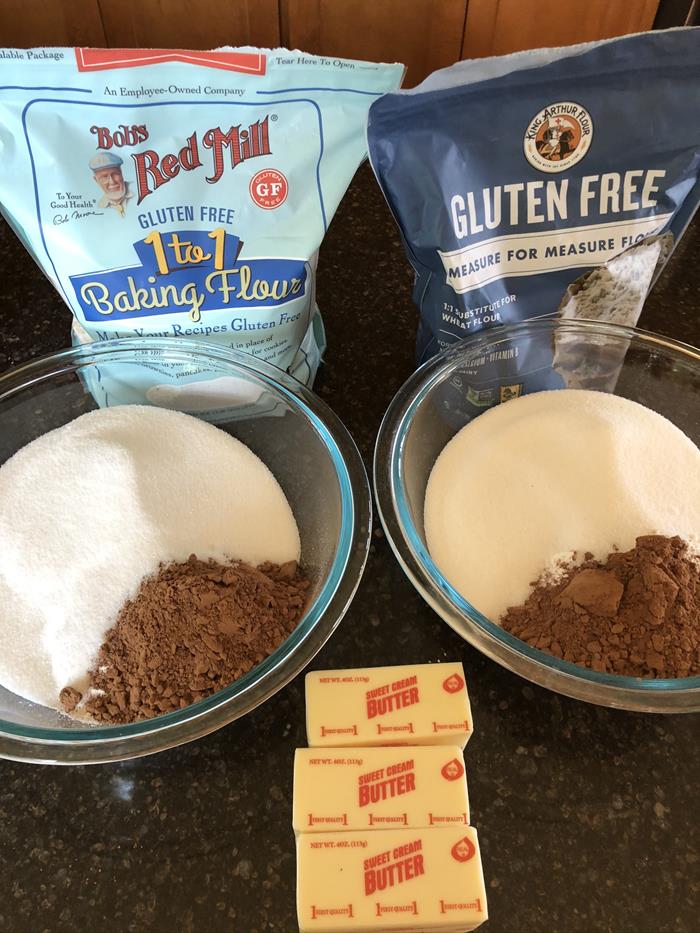 A Summary of Our Thoughts

The Krusteaz gluten free blend is also a blend I would use again in brownies. I am not sure I would use it if I had the other blends on hand, but if Krusteaz is what I had on hand, I would definitely use it again. It is a great option if you want a blend that contains more whole grains.

I will not be using the Better Batter blend in brownies again. I am going to try it in other types of recipes, but for my family, it would be a waste of ingredients to use this blend in brownies. It is also not a blend I would recommend others use for gluten free brownies. I like my recipes to be so good that you cannot tell they are gluten free. The Better Batter made it obvious that these brownies were gluten free-both in taste and texture.

I would love to try more gluten free blends in brownies. If you have a favorite blend that I should try, let me know and I will add it to the list.

Get my ebook, 21 Gluten Free Desserts, full of delicious and easy-to-make desserts, when you subscribe to my free newsletter, Lynn's (Gluten Free) Kitchen Adventures.